Is Flavored Coffee Worth Drinking?

Flavored coffee is an oft-debated topic. Some coffee lovers are totally in favor of it, while others seem to frown. Today, we’ll give you an overview of flavored coffee and assess some of the popular flavored coffee options out there so you can decide if it's worth trying out or something you should skip altogether. Who Decided to Add Flavor to Coffee in the First Place?

Adding flavor to coffee has been in practice since the 1960s. When the price of coffee went through the roof, many companies weren’t able to afford high-quality beans anymore. To adapt, they settled for low-quality coffee beans, using oils to flavor them to conceal bitterness.

The price of coffee has since stabilized, and many coffee connoisseurs prefer to taste natural flavors when sipping their morning cup. Having said that, flavored coffee continues to be in the line-ups of many coffee brands.  Additionally, the number of flavors has greatly expanded to include everything from creme brulee, to mint chocolate chip, to pina colada!

How is Coffee Flavored?

Prior to roasting, oils and spices are added to coffee beans, coating the exterior.  These oils and spices, when combined with a solvent, are absorbed into the bean to give it the desired flavor. Propylene Glycol is an active ingredient in almost all flavored coffees, acting as the solvent in the flavoring process to allow the bean to better absorb the flavoring added. Even higher-quality offerings generally contain it, particularly in coffees made by American roasteries. European countries, on the other hand, generally limit the amount of Propylene Glycol that can be added to flavored coffee.

Flavored coffee contains a small portion of Propylene Glycol, but not enough to result in any harm. If you do consume a lot of coffee, you may want to avoid drinking flavored coffee exclusively.

Some people mistakenly believe that flavored syrups and flavored coffees are one and the same. Although they both add extra (“unnatural”) flavoring to your coffee, they differ in other important respects.

Coffee syrup is usually added after being brewed, while flavored coffee obtains its extras when it’s being roasted.

Generally, flavored coffee doesn’t increase the amount of calories in your drink, and tends to have no sugar added. You probably won’t see flavored coffee at the neighborhood coffee shop, though. Conversely, coffee syrups or flavored syrups are ubiquitous at cafes, even in independent ones.

In contrast to flavored coffee, a significant portion of extra calories and sugar are generally added to coffee syrup beverages. They usually contain either high fructose corn syrups or regular corn syrups as a main ingredient, in addition to various preservatives, including sodium benzoate and potassium sorbate.  Zero calorie syrups use sweeteners (either artificial or “natural” like Stevia) in the place of sugar.

Although flavored coffee isn’t quite our passion, a number of people understandably enjoy indulging in it.  As such, we’ve put together a list containing some of the most popular flavored coffee options out there. 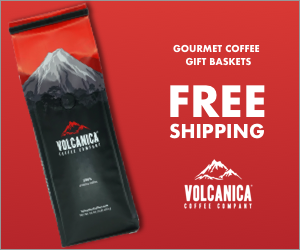 You’ve probably heard or seen the name Volcanica Coffee before. This brand of gourmet coffees has a variety of blends and origins to pick from. They also have a variety of interesting flavored coffees available (at medium roast).  Their coffee flavors are comprised of natural ingredients, and do not contain any calories, allergens, or sugar. Volcanica even offers holiday flavors throughout the year. Their flavored coffees are available as either whole bean or ground.

With regard to Volcanica’s holiday offerings, the eggnog flavor is to die for. Our particular favorite of all their choices is called Crème Brûlée. This drink integrates the traditional French vanilla taste that creamers are generally known for, but with hints of caramel and burnt sugar.

There are also more holiday flavors to pick from, as well as a Volcanica gift box featuring Hazelnut, CocoLua, Butterscotch Toffee, and Amaretto. 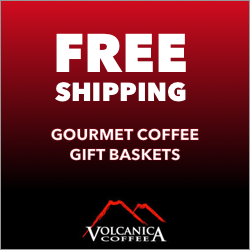 Maud’s coffee is a selection of K-Cups. On top of the company’s regular blends (14 in total, which includes 10 different gourmet plans and a quartet of organic fair-trade blends), Maud’s has more than eight different flavored coffees you can choose from.

This company uses 100% arabica medium roast “level 5” for flavored coffee. They also use recyclable packaging, unlike most of the K-Cup alternatives. Each one of Maud’s flavors additionally comes in decaf versions (except for the seasonal pumpkin spice flavor).

Maud’s flavors aren’t anything newper se, but they compensate by way of amusing naming. Hottie Biscotti is the best name for vanilla almond we’ve ever heard of!

Our favorite of Maud’s flavors is Hottie Biscotti. The toasted almond and vanilla cream notes provide for a warm, comforting flavor. It’s easy to spot this flavored coffee in a store carrying it– just look for vibrant pink packaging.

Cameron’s Coffee beans are sourced with sustainability. To reduce consumption of water, their beans are roasted in small batches. Cameron’s Coffee also claims to source arabica from only the top 10% of producers in quality. No Robusta beans are ever part of their blends.  Cameron’s Coffee’s roastery avoids over-roasting by immediately cooling beans after they reach an intended roast level.

Our favorite coffee from this company is Highlander Grog. As a Scottish-influenced coffee, this beverage contains spicy hints of rum combined with sweet and smooth caramel, vanilla, and butterscotch. Highlander Grog is a lighter roast- a contrast from their other medium roast options.

Crazy Cups is another single-serve brand with an outstanding lineup of flavored coffee. Crazy Cups uses recyclable K-cups, and their flavored coffee is both calorie-free and sugar-free. Pareve, kosher, vegan, lactose-free, gluten-free, and artisan roasted are just a few of the offered variations. A number of the coffee flavors come in decaf versions, as well.  Crazy Cups adds flavor to their coffee by adding a mix of oils and spices, or a flavored syrup, to coffee beans while they’re roasting.

With an assortment of flavors to pick from, we found it hard to choose just one favorite. We ended up choosing Bananas Foster Flambe.  The flavor of dark rum highlights notes of cinnamon, brown sugar, banana, and vanilla ice cream.

Crazy Cups also has a number of unique coffees produced in association with other interesting brands, including Torani, Barnie’s Coffee Kitchen, Cake Boss, and Guy Fieri, among others.

Things to Watch Out for When Considering Flavored Coffee

Much like how a French roast’s charred tones are sometimes used to conceal the taste of low-quality beans, flavored coffees are often meant to serve a similar purpose. Companies may use beans on the verge of expiring, an unwanted variety, or even ones that contain defects adversely impacting flavor.

Try to buy flavored coffees from reputable roasters known for quality to ensure you are getting a quality product. You might also notice a number of very inexpensive flavored coffees on the market. As exciting as that may initially seem, there’s a bit more than meets the eye.

Exceedingly low prices for coffee beans can be problematic for the supply chain. According to the SCAA (Specialty Coffee Association of America), 63% of Central America’s coffee-growing homes endure malnourishment and food insecurity every year. This statistic is, in part, a consequence of exploitative trading practices.  While often less palatable to the end consumer, reasonable prices promote sustainable practices and optimal growing conditions.

While it’s often hard to tell which flavored coffees promote sustainable coffee growing practices, look for Fair Trade Certification when available and buy from roasters that demonstrate a concern for the farmers they source from. How to Choose a Flavored Coffee of High Quality

If you’re interested in figuring out which roaster you should buy your flavored coffee from, here are a few considerations: