In the last decade, the AeroPress has grown from a niche contraption into a global phenomenon. From viral hashtags (#milehighaeropressclub) to countless crowdsourced international championships, the AeroPress is a now a cultural institution. Coffee lovers—including us here at JayArr Coffee—adore the AeroPress for several reasons. One of our favorite traits is how you can tweak your brewing method so many ways to produce new variations of the same coffee.

New to the AeroPress? Check out our guide here.

Looking to try out interesting recipes with your AeroPress? Or better yet, do you want to brew award-winning coffee right in your kitchen? If so, read on as we highlight our experience brewing recipes by 5 of the World AeroPress Championship winners.

The World AeroPress Championship in a Nutshell

In our quest to brew the best cup of AeroPress coffee, we decided to test the world’s best techniques—taken directly from the World AeroPress Championship (WAC). This is an intense yet thoroughly fun international competition that has been happening in different locations around the world for over a decade.

From just 3 competitors in the first World AeroPress Championship in Oslo, the competition has grown to attract over 3,000 competitors from over 60 countries. Coffee aficionados pit their best recipes against each other until one ultimate recipe is left. After each year, they post the top three recipes online for people to try themselves— the last five winning recipes are what we’re sampling and reviewing in this blog.

Getting Started – Which is the Best AeroPress Recipe?

Disclaimer! Please note that all the methods in our experiment use the inverted AeroPress technique, which is not described in the manufacturer’s packaging and website. The manufacturers assemble the filter, coffee, and water—in that order—and push it through. With the inverted technique, you place the plunger before you start anything and later flip the whole thing upside down. You then basically brew your coffee in the upside-down AeroPress, place the filter cap and decanting mug, invert it, and plunge the extracted coffee. This gives you more freedom to play around with the brew time and things like that before the coffee starts floating through.

To make this a fair test, we used the same coffee grounds throughout the experiment. Below are the general ingredients we used for all the recipes.

The Standard Recipe – Our Control Brew

As with any experiment, it’s important to have a control or a standard for comparison. In our case, we brewed a cup using the manufacturer’s standard method. Using the inverted method, we poured 80-degree water up to level one and stirred for 10 seconds. Then we gently pressed the plunger in and paused whenever we felt resistance—and that’s it; that’s the standard recipe. PS: You can top up if you want a larger cup.

After sampling the cup made using the normal AeroPress technique, we noticed that it had a nice level of richness, a little bit of smoky black pepper, some raisin, and hints of some prune and dates. It was smooth and not too bitter—just a really pleasant dark roast with some nice fruit carrying it through. Wendelien van Bunnik—the latest winner of the coveted WAC title—used 30 grams of coffee (at a grind of 7 out of 10 coarseness) and 100 grams of water at 92 degrees Celsius.  We used to following method to reproduce this recipe fairly closely.
Print Recipe Pin Recipe

But, how did the cup taste? Wendelien wanted us to try the cup at 60 degrees Celsius. To quickly cool down the coffee, we decanted the steaming coffee into another mug. We took a sip and noticed that it was so much more mellow and balanced than the standard coffee. The smoke and black pepper taste was now immediately present before yielding way to the fruity notes— resulting in a more complex, less overpowering profile. No bitterness, nice roast flavors with a lovely aftertaste—it felt like a leveled-up version of the basic AeroPress brew. But did it differ from the other winning techniques? 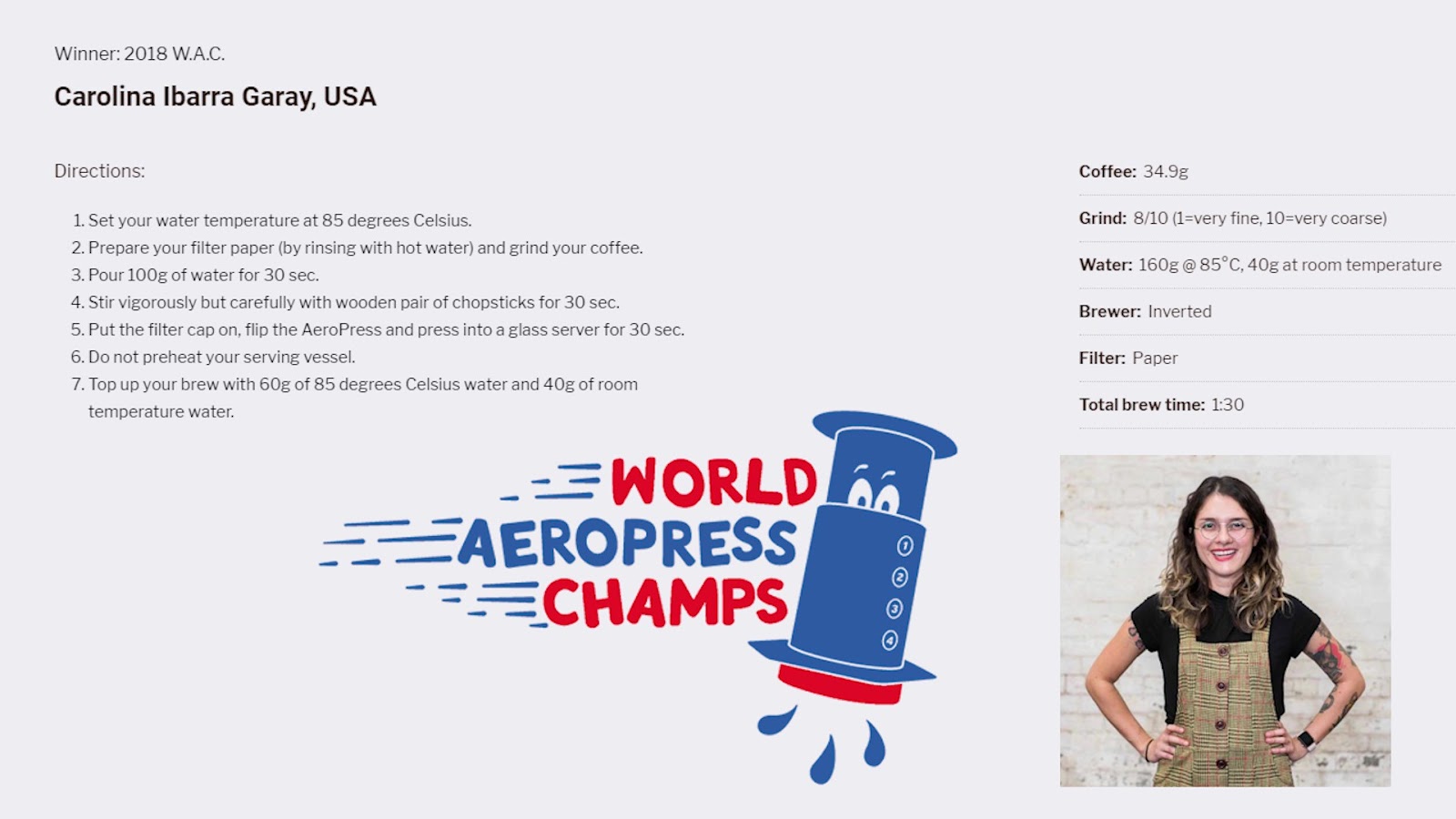 In her winning recipe, Caroline Ibarra Garay from the US used 34.9 grams of coffee (at an 8 out of 10 coarseness).  We used to following method to reproduce this recipe fairly closely.
Print Recipe Pin Recipe

Initial Disclaimer: We did not preheat the serving vessel as per Carolina’s recipe.

This cup felt a little bit more mellow (probably mostly because it had a lower coffee to water ratio than the previous entry).  All in all, it was an easy-drinking brew—but we think it’s just too much effort for only a slightly better cup of coffee. We were also not getting as many of the exciting tastes of rich dark fruits and smoky roasted pepper that were getting in the 2019 winning recipe. 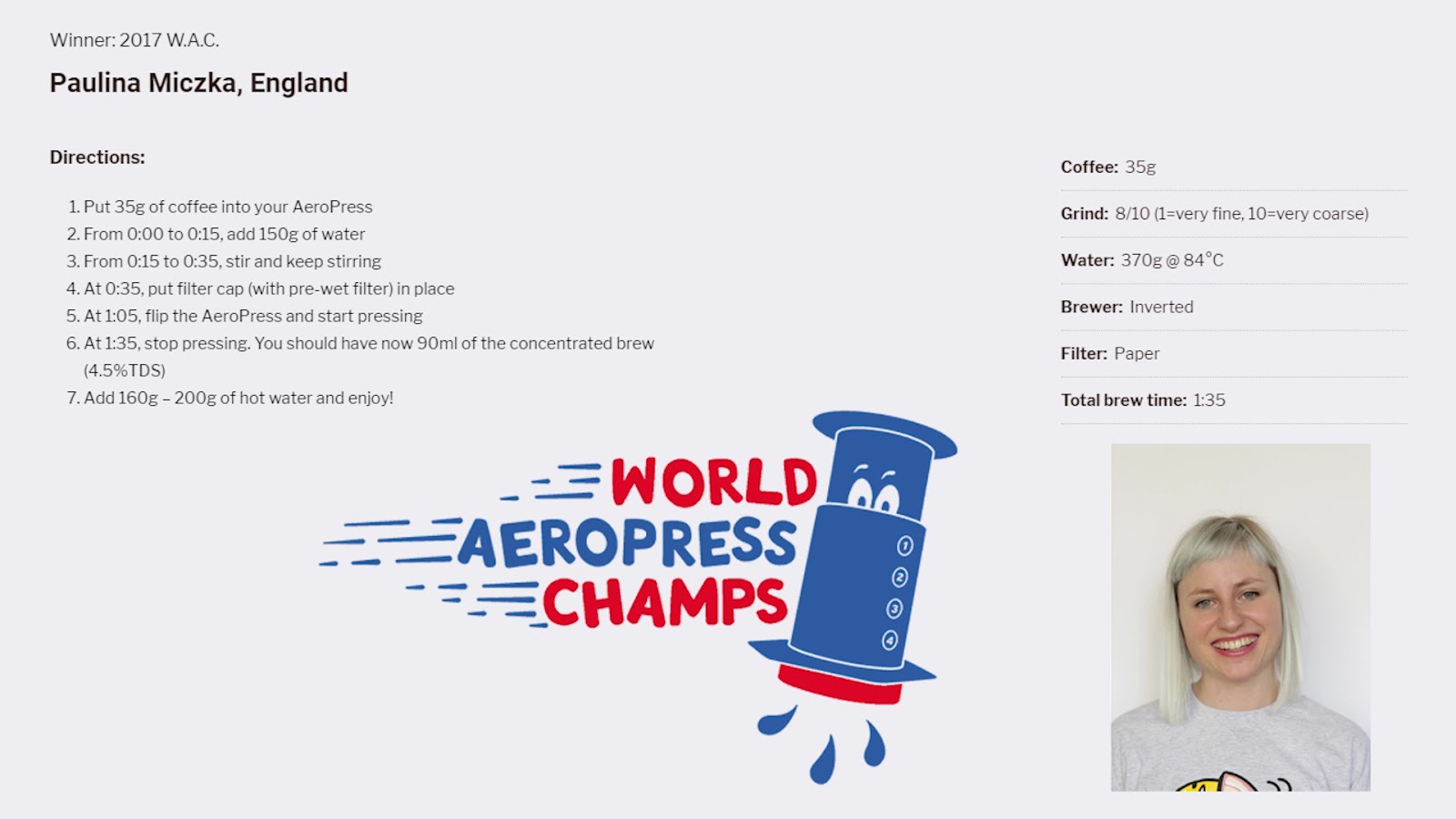 The 2017 winner—Paulina Miczka of the UK- used 35 grams of coffee (at a grind of 8 out of 10 coarseness). We took out our stopwatch and got to brewing! We used the following method to reproduce this recipe fairly closely
Print Recipe Pin Recipe

The coffee had a bit of sweetness in the aroma and it was noticeably bitter—the technique yielding significantly more bitterness with quite a tart sensation. The only flavor from the previous iterations that we tasted was perhaps the smokiness.  Simply put, the coffee was too bitter for our taste—but those of you who live for the bitterness can give the 2017 WAC winner a go. 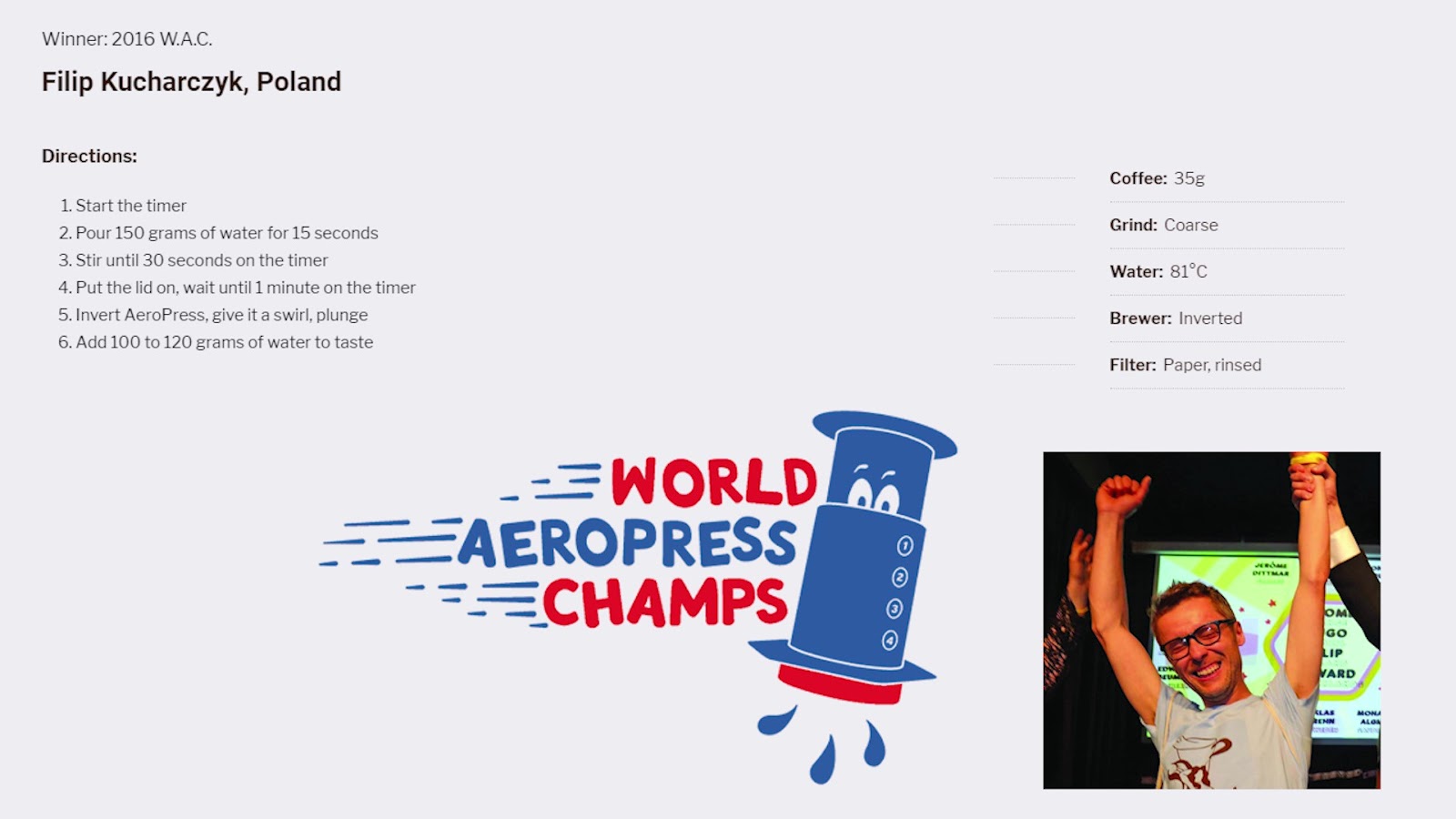 The cup was mellow and rather similar to the 2018 winning recipe. Everything was subdued (including the bitterness) with a nice bit of smoke, a bit of black pepper, and some fruit sweetness that cut through the bitterness. We thoroughly enjoyed the mellow cup—and concluded that it was among the top recipes we tried. 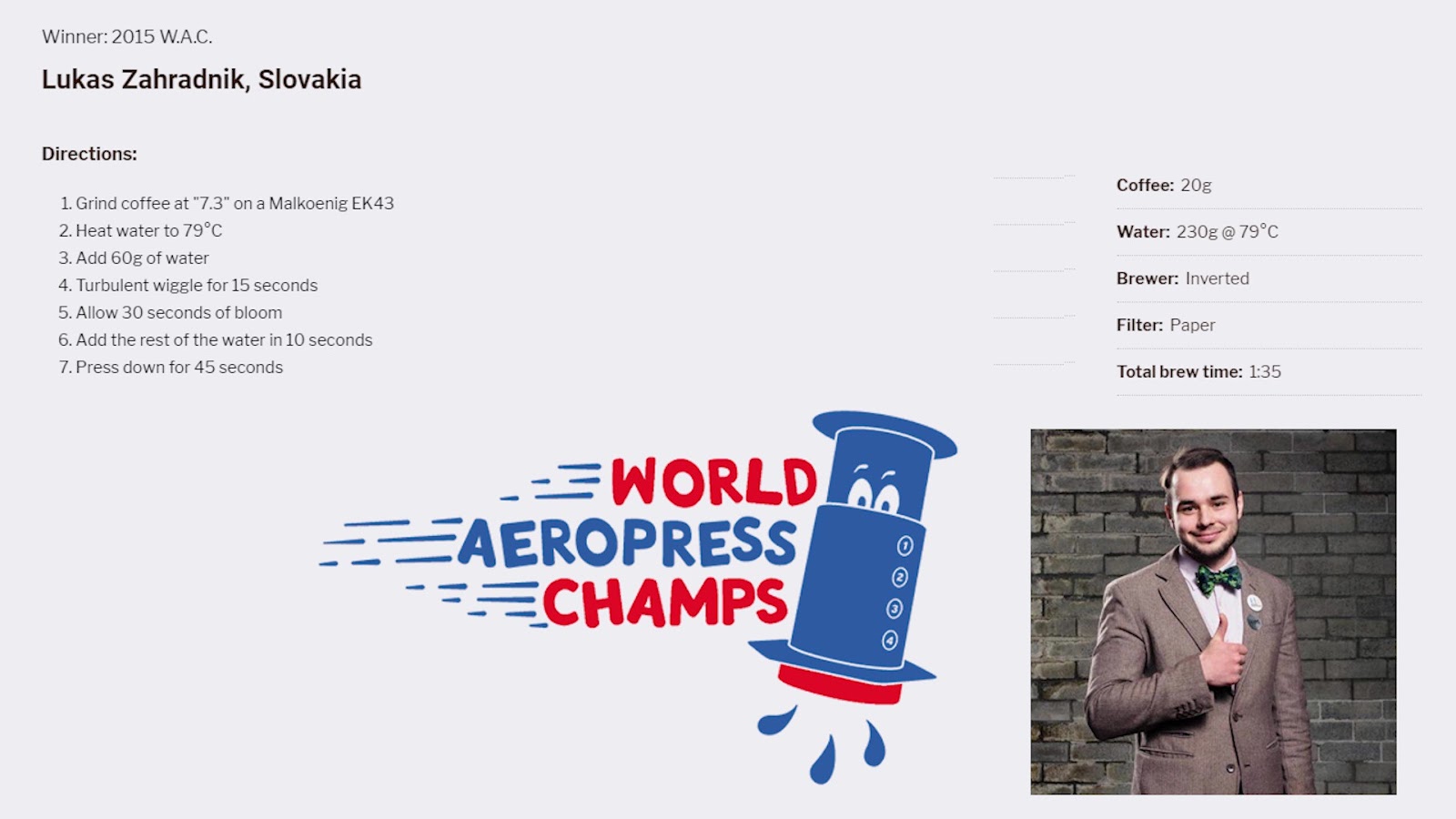 The final coffee in our experiment was the 2015 World Aeropress Winning Recipe by Lukas Zahradnik from Slovakia. He used 20 grams of coffee and 230 grams of water (79 degrees). We used the following method to reproduce this recipe fairly closely:
Print Recipe Pin Recipe

The coffee was really bitter, tough, smoky, and very peppery. It was easily the most potent and bitter of the five coffees we tried.  We weren’t as big of a fan of this recipe, unfortunately!

The same way beauty is in the eyes of the beholder, good coffee is the palate of the coffee enthusiast. For us, we probably liked the 2019 winner the best. It balanced the lovely dark rich fruits with a nice pepper smokiness and just the right amount of bitterness. However, the 2016 winner was also fantastic.  So, which version will be your favorite? Get brewing and find out!